ArduCAM Shield Mini 5MP Plus is the latest version compared to its predecessor ArduCAM-M-5MP. It is a general purpose high definition 5MP SPI camera, which reduces the complexity of the camera control interface. It integrates 5MP CMOS image sensor OV5642 and provides miniature size, as well as an easy-to-use hardware interface and open source code library. This camera can be used on any platform like Arduino, Raspberry Pi, Maple, Chipkit, Beaglebone black, as long as they have SPI and I2C interface and can be well mated with standard Arduino boards. ArduCAM mini not only offers the capability to add a camera interface that doesn’t have in some low-cost microcontrollers but also provides the capability to add multiple cameras to a single microcontroller.

Single capture mode is the default capture mode of the camera. After issuing a capture command via SPI port, the ArduCAM will wait for a new frame and buffer the one entire image data to the frame buffer, and then assert the completion flag bit in the register. The user only needs to poll the flag bit from the register to check out if the capture is done.

Short movie recording mode is advanced capture mode. By setting the maximum number of frames in the corresponding register, the ArduCAM will capture continuous frames until the 8MByte frame buffer is full.

The JPEG compression function is implemented in the image sensor. With proper register settings to the sensor, the user can get different resolutions with JPEG image stream output.

Sometimes user wants to read the same frame of image data multiple times for processing, the rewind read operation is designed for this purpose. By resetting the read pointer to the beginning of the image data, the user can read the same image data from the start point again.

Some battery power devices need to save power when in the idle status, the ArduCAM offers the low power mode to reduce power consumption, by shutting down the sensor and memory circuits.

Image sensor control function is implemented in the image sensor. By setting the proper set of register settings, the user can control the exposure, white balance, brightness, contrast, color saturation and etc.

The typical connection between ArduCAM shield and Arduino or etc platform is shown in Figure 1. More typically Figure 2 shows the wiring for the Arduino UNO R3 board. 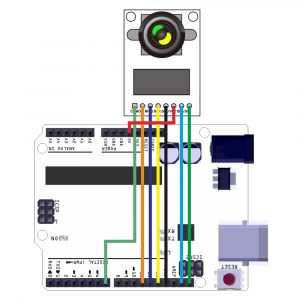 The multi-cameras connection between ArduCAM shield and Arduino or etc platform is shown in Figure 3. More typically Figure 4 shows the multi-cameras wiring for Arduino UNO R3 board. 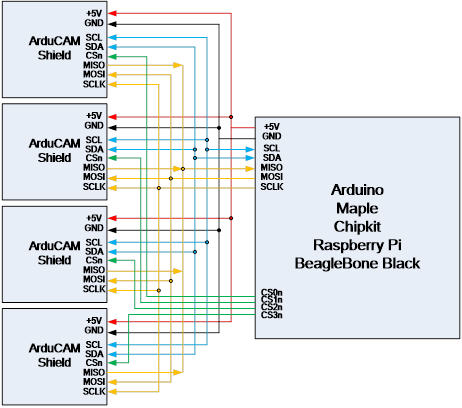 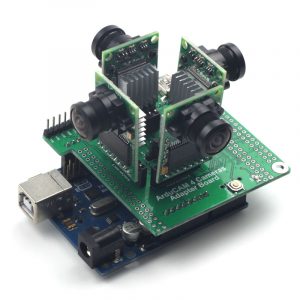 The ArduCAM SPI slave interface is fixed SPI mode 0 with POL = 0 and PHA = 0. The maximum speed of SCLK is designed for 8MHz, care should be taken not to overclock the maximum 8MHz. The SPI protocol is designed with a command phase with a variable data phase. The chip select signal should always keep asserted during the SPI read or write bus cycle. For SPI detail timing, please continue to read Arduchip chapter.

The ArduCAM Shield Mini 5MP Plus camera shield is shipped with default LS-27227 (S mount). There are more lens options which can be found from our lens product page. 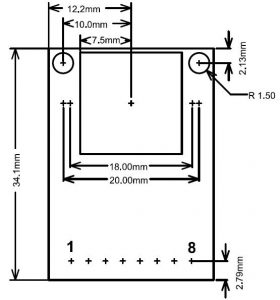